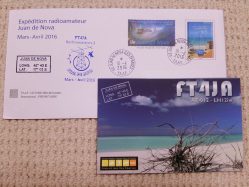 Today, we shipped a big package of envelopes to the T.A.A.F in Paris. (In july, they asked us not to send it before the last week of august).
They will process them and put stamps on it before to ship them to you.

Following to our informations, the envelopes sent mid-july to the TAAF are not all processed. That’s why some of you did not received their envelope yet. After a little break during summer vacations, it should go faster now. We’ll keep you posted.
From now, all OQRS and direct request received will be sent back using classic postal service.

Update Sept 7th: we had an email exchange with our interlucutor in charge of philatelic program and postal service. He told us that about 1000 envelopes were not yet processed but  all of them (including those sent on august) will be sent before the end of the month.